A proposal suggesting ways to alter the current plan of the Hackspace has been raised by a few members. Please take time to read our proposal and raise any concerns or ideas you may have. We feel that these changes will be more beneficial to the space as a whole.

Currently a set of A0 plot plans have been pinned to the wall at the Hackspace and a few hard copies of the will be left in the space for members to read.

That would compensate for the lack 30% of space from the metal area and might require less work since you don’t have to strip out all the plasterboard in the green room.
Loosing overall space in that area might be a problem if we decide to get a metal mill (such as a bridgeport)
Compared to woody dusty which I think is oversided but probably used less due to it being a tip.

in the short term we could do welding in the cnc room since that will have extraction setup in the next week or two (although it does lack space due to tables).
I don’t think we need a separate area for grinding since folks have just been grinding in the general metal area anyway or we could do that in welding.
but welding definitely needs to be separate

For the class room I think there’s an open drain pipe in there at the moment that might need to be sealed or used for the proposed classroom toilet
I think that’s where the mould on the ceiling might be coming from. so whichever option we go for that’s one thing to add to the list to be looked at

If we do decide to move the metal area into the wood / classroom area
then I’d like to see that area fully done up / painted etc before anything was moved there from the metal area
otherwise it may end up becoming just a larger mess / being much worse than the current setup.
We’ve spent a fair bit of time trying to get it looking reasonable in the current place so I wouldn’t want to see it moved some place else if it’s going to end up looking like a tip after the move
such as the current state of the woody dusty area. (especially if it’s full of mould)

Personally I get the feeling the amount of work involved with the original proposal might be a bit too much
since there hasn’t been that many of us (outside of hack the space days) that have been putting up walls / electrics etc.
So reducing the amount of work needed is probably a important point

as another thought, maybe instead of the green room
put another wall in the woody dusty area at the far end and turn that into the accessible toilet instead
since I feel woody dusty is too big currently and that might help balance things out

just to add some additional points for consideration

This is going to take up additional space, we nearly got a shaper donated to us upstairs but lacked the room for it.

Another point is 3 phase, currently the metal area is fairly close to a point where we can draw 3 phase from (back of the craft area), further away in the classroom area may require cable that’s expensive.
So far we only have one 3 phase tool (one of the welders) and that has a fault with it’s instrumentation transformer as far as we can tell.
But keeping close to the 3 phase to avoid long cable runs I think is a good thing.

Some of us have also looked into ventilation for welding, the idea that welding only creates ozone is a bit of a myth unfortunately especially with stick welding which has flux in the sticks.
Running a pipe across should be fairly straight forward.

For PPE typically I’m planning on using for myself

Another thought is if we try smelting in that room that would definitely require ventilation (probably a couple of other things as well).

I’ve been discussing the proposal(s) with others in the space over the past week and was urged to add my contribution, but not 100% sure what’s useful. Are you looking for general opinions, votes for or against certain things, or further ideas?

Happy to contribute both ideas and manual labour.

Hi,
I just thought I’d add some more comments before the meeting

Pro’s for it staying where it is

Pro’s for moving it to the green room

As a next project me and my father are going to have a look at cleaning up / painting the cnc room.
Probably some cheap masonary paint on the walls and floors, and the sponging down of that black mold that’s in there. (since we can’t drill any more holes in the walls at the moment)

I understand that there needed to be some investigation done before the meeting of the state of the green room. However personally I think what’s been done is a bit excessive.
A small hole cutter in a battery drill at one corner of the floor would have been enough (same for the wall but a bit bigger)
unless there’s a plan to replace the click flooring regardless of the room’s use I think ripping up all the floor was a bit much

I suspect it’s unlikley we’ll be able to re-use that click flooring that was taken up.
I recently put down some new stuff that had been sitting in a shed for a while and the slight amount of cold / damp can cause the tongue and groove to become distorted making it very difficult to get down.
In the case of that stuff it’s probably been subjected to a lot of moisture and has been put down already at least once.
(not to mention god knows what it’s been subjected to in a night club) 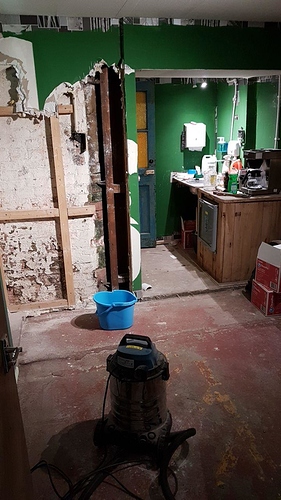 All of the above.

I’m a fairly new member (about 3 months) and mainly use the space to work from a couple of days a week. I just use a laptop for that. Maker-wise, I’m into metal stuff (welding, soon hopefully turning) and wood (basic functional furniture etc.).

Unfortunately I can’t do Monday nights at the moment because I’m doing a welding course.

Having looked at and discussed the proposals, I support the current layout for the same reasons as Richard’s (above).

I’m also not convinced of the business case for a classroom, but I could be very wrong on this. My gut says that the main area would work well for such a space, given how frequently it would be used.

I’m not well informed enough to comment on the state of other areas because I don’t know the intended plans for the space or what’s considered ‘messy’, ‘finished’, or ‘functional’ by general Hackspace consensus.

As I’m in the space fairly frequently, I’d be more than happy to complete some odd jobs if I could see a schedule of work, etc.

I think it is very positive that drawings have been done and that discussions have been had.

I was greatly relieved to see a new drawing put up at the space and this put my mind at rest.

That is where we keep the metalwork where it is and do not split up the area I have been working on.

Changing the designation of the “classroom” to new greenroom is more or less exactly where I thought made sense. Moving the green room away from snackspace as a lounge and having a quiet room did not seem ideal.

Here is my logic.

As literally billions of pounds are spent on classrooms and a miniscule amount is spent on self organised learning environments (SOLE) I would prefer that we model the space on SOLE.

However recognising that we could run short courses to attract people into the space as they have been so heavily indoctrinated into a classroom model, I would suggest that the current snackspace area could be used for collaborative endeavours and assisted learning for part of the time, as well as larger members projects, and with the construction of two walls and a double glazed door panel (which I have spare) would mean that this back area could be more easily heated for static work, (that is computer use and electronics work) where people sit down.

I was saddened to see a suggestion that we reduce the metalwork area, why not reduce the woodwork area? Someone suggested that it was not fully used. Well nor is the woodwork area. If we had the three phase and the ventilation then we would have seen more happening in the metalwork area. I would like to see a 3d metal printer and casting, which children do in the Fablab in Warrington in the corner of a classroom. If we move it then we have little room for expansion.

What is it about ventilation that people find scary? I would be happy to help design and implement a suitable ventilation system, admittedly I would have to do some research as it is over forty years since I worked at Potteries ventilating and heating in the workshops and at customer sites and in the drawing office, but it was always about moving air and sometimes about filtration.

In conclusion I strongly support the move greenroom to classroom position, with the addition of walls and glass partitions for the current snackspace and metalwork areas.

Hi Brittain,
I agree on the points you’ve raised.
Casting I’m definitely up for, that’ll probably require an induction heather of some kind

This is the reason I’m more focused on cnc milling rather than 3d printing the metal unless there’s a cheap way around that.

For ventilation I think it’s very likely we’ll need that, stick welding is one of the easier ones to do from what I understand but also creates the most amount of fumes. There was one guy on youtube who mentioned he’d had half a dozen sinus surgery’s because of it.
I think stan is searching for an electrostatic one, although we have a lot of that rigid pipe next to the lift that’s the right size for it as well. If you could come up with a design for something I’d be most grateful.
I’ve got a few upcoming projects that will probably require welding in the future.

One thing I’d like to see is a large mill such as a bridgeport, with that and the lathe it opens the door for creating other things by hand such as a surface grinder or metal shaper.