I’m wondering if there is anything we can practically do to increase ventilation in the space when we reopen. I’m not trying to increase the number of people allowed in the space, I just want to try and improve safety for whatever occupancy we decide on. Here’s a few ideas:

I’ve been thinking about this too given the recent evidence that SARS-Cov-2 is in fact airborne as opposed to being carried in droplets. 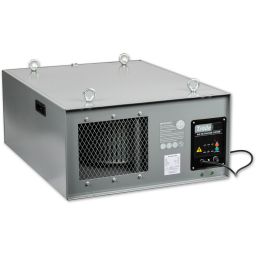 With a powerful Input 150W motor, the AT25AFS Air Filter is intended for the smaller Trade workshop, especially where hand sanding takes place. The air passes through the electrostatic pre-filter into the main pleated filter, filtering 98% of all...

It’s the right size for our main area and would, if positioned correctly, create a cyclone effect where air is rotated about the space and this would pick up general crud which we don’t want in the air. If fresh air is also introduced to the space this would even better improve the situation.

For defending against covid, I think we need to have the facility to have considerable amounts of fresh air ventilation without having doors open:

I think having the filter (linked above) to remove dust and mould etc, combined with a new fan above the main door, and using tensabarriers and perhaps a voile curtain to provide a degree of privacy (so wanderers can’t see in) might be a reasonable effort in combination with limits on people in at one time.

UVC units are not going to be cheap though and this only works for 60m² which is roughly woody dusty size:

In short yes its being looked in too. I’ve specified that the space should buy the Axminster Trade Air Filter that Conor linked above with carbon filters fitted instead of the standard filters. For woody dusty the dust extraction system will have the ability to just run without tools in use to help extract some of the lingering dust.

Again like Conor mentioned we’d like to get fresh air into the space, however it is my understanding this can be a little bit complicated due to fire zoning so for now this is on hold till we can get some expert advice.

Please don’t open the other double doors, the latch mechanism on them is broken so it can be difficult to get the doors to close securely again.

Should also add that the Axminister Trade filter is the largest that I could find for a reasonable price with a recommended room size of 300m3, others like one by Record Power has a room size of 113m3.

For reference the main area including Visual Arts, Electronics etc is approximately 800m3. It just means that it’ll take 2.5 times longer to cycle the air

My original thought was for ‘quick fixes’ we could use to increase ventilation without requiring major construction work, and was Covid-19 related. All these ideas are good though!

With regard to pulling in air over the doors - would we need to cut holes in the blocks above the doors to do this? Cutting holes (especially above a lintel) feels like quite a lot of work to me, perhaps someone with more buildings experience can comment on that.

@Marcus6275 - I’m not going to open the other doors right now, I know the issues with it. But if we were to use those doors in the future, is it a case of replacing the latch or something more complicated?

Re the issue with the right hand leaf of the snacksapce doors, the push bar when pushed lowers the top pole down, and raises the bottom pole up, which in turn releases the catch on the top and bottom of the door.

We can fix this door, it is just a pain to unscrew the hardware to straighten out the bent piece of metal.

For info there is a hole in the wall in the CNC room that leads to the outside
there’s a plastic vent cover on the outside and a fan on the inside, this was put in place after a member drilled a hole in the fire door and tried to mount a fan on it.

As for bringing air in, that I’m not so sure about.

One of the things we noticed when making the hole is that the wall is actually an old window that was bricked up so we also had to drill / cut our way through a wire mesh to get through it mid way through (ideally needs a sds drill and a core drill bit), so its not easy but possible.

Another idea would be to drill a second hole next to the existing one in the CNC room, run a pipe from that through into woody dusty, then use that as an inlet

We have recently also purchased a fan, ducting and a fire damper to allow us to bring fresh air into the space directly from outside, this will require some work in terms of drilling a hole in the wall so any volunteers who wish to assist in helping with this should let us know.

Excellent! I’m very happy to come in and do some drilling or otherwise help out. Do we know where we want the hole made?

I have an idea Jim - if you’re okay working on this together let me know. I’ll have a mask on and we can have the doors open.

Another idea I had was removing the door closers in metalworking so that air can blow through.

Additionally just need to get some hardware for suspending the pipes, will seek to get this cheap from eBay but your input would be good too in case there’s a better method than what I had in mind (2mm steel cable suspended)

Sure, I think it’ll be pretty low risk and worth it if we get ventilation up. I’m free at weekends and most mornings. I don’t really have any ideas about suspending things from ceilings, cable sounds OK. Maybe someone else has ideas.

Another idea - we could remove the door closers into metalworking to allow natural ventilation though the space and lift shaft. I know metalworking is now a fire zone but the fire alarm for our unit is all one zone so should be okay.

We’ve received confirmation that the ventilation parts for bringing air into the space will be delivered tomorrow. Currently waiting on the Axminster Air Filter as it was on backorder.

As I have experience from the toilet extraction I’d like to be there when it’s installed as can be a bit of work. I’d also like us to do a dry fit on the floor first to check we have all the right parts and aren’t missing anything. Additionally it would allow us to know lengths and where it will be best installed. Only 3m of ducting was ordered so we’re limited as to where we can install it anyway.

This weekend we are focusing on cleaning the hackspace and doing our best to get the space operational again ready for opening on the Monday 12th. We have a skip booked for this Saturday 10th however depending on availability it might not arrive until the following weekend Saturday 17th. As such I’d ask that we hold off installing the ventilation until the skip has been delivered and filled. This would make the planned weekend for installation as either Saturday 17th or 24th.

Hopefully we should also receive an update from Axminster by then on the estimated delivery date of the filter so we might be able to get both installed simultaneously.

Excellent. Happy to come and help out on the 17th or 24th as needed.

Reading between the lines a bit here, I take it you’d like to take over the installation? I’m not too fussed over it, I just want it done - my plan was to get the generic stuff cheap from eBay to save a few bob compared to the official site hence not specifying connectors and fittings in my original draft to the board.

By all means do it as you see fit but as a handover of sorts my idea was to use steel cable, and suspend a wire between the walls in the vestibule (outside wall and inner wall) then hang off that wire a wire for each 1m section of pipe using jubilee clips to hold each section in place. The fan can be mounted to the wall using a wooden bracket as it’s a bit heavier, with steel wire as a backup in case of fire. There are numerous fittings used with steel wire, which allow for a hook to be used in the walls and ceilings and then a crimp to make a loop out of the wire. There is also a thing to tighten up the cables without twisting them so everything can be made level.

I originally planned for this to go over the main door but if we do that it must not block the fire exit in the event of a fire so everything must be done correctly such as using fire rated wall plugs as plastic ones will just melt and cause the ventilation to fall down, possibly blocking the exit. If you don’t want to do it that way, you can put it over the classroom but then you’ll want to have to go further into the space due to the angle of the wall and may benefit from another metre of 100mm pipe. Remember, my proposal I gave to the board was only the first step to get fresh air into the space - once things have settled a bit I will be drafting another proposal for distributing fresh air around better. Don’t forget to use the fire damper too - this seals off if it gets hot and prevent the fan fueling a fire by blowing fresh air in. Maybe have a look online and get familiar with the regulations which aren’t always too clear, but it is required.

I also have in an eBay basket some 100mm covers for the pipe with fly guards, one for outside and one for inside. Stops crud getting in so easily and has a nice finish. Again, cheap from eBay as it’s super generic.

In terms of mounting the ventilation system, it would be the same. Suspended on steel wire would reduce any vibration and would be similar to the official mounting kit that was an optional extra but at considerable cost. Just make sure you get a steel wire capable of holding the unit’s weight.

Also, for your convenience I’ve included a couple of links on the fire regulation aspects to get started with, I read some more into it but don’t have those sites to hand, but you can find them with your search engine of choice