The board has approved the construction of the remaining walls for the metalwork area of the space. The work for this is planned to be completed in the up coming weeks. The metalwork walls will be built the same as the woody dusty walls. Two layers of fire rated plasterboard with a layer of chipboard/OSB underneath.

As part of the work the metalwork area will require all the tools and equipment moved so that the building team have unobstructed access and to help ensure nothing is damaged during the build.

I would like to propose that the metalwork team/group have a meeting to take this opportunity to review the layout of the room and draw up how they’d like the room to be laid out going forward. This plan would be expected to include equipment, tools & work bench positions as well as lighting and electrical socket locations (note current Covid restrictions my limit layout possibilities).

Once the walls have been built the construction team will put the tools and equipment back in the locations requested by the metalwork team. Where possible lighting and sockets will also be installed, however this won’t be guaranteed.

Attached are two PDFs, one with everything located as is currently in the space. This should help provide an idea of how big equipment is. The blank PDF has only the walls of the metalwork area. The PDFs are A4 to make it easier for members to print out and sketch their proposals if they wish.

I propose the meeting be held virtually, due to the current risks of meeting in person. I volunteer to host and provide some system for sharing and collaborating on a plan of the area, and have put up a doodle poll (https://doodle.com/poll/eci6tbn2ne725mc6) to decide on a suitable date. Voting will close on or around the end of the 26th, and I will then provide details of the date, time, and meeting link here. In the event of a tie I will prefer the earlier date.

Do the construction team need any help with this as I am more than willing to throw my hat in the ring but will only be available on weekends.

only just seen this! happy to have a meeting whenever. might be worth sharing this on the telegram group?

Thanks for the offer

Currently I’ve got enough people helping with the work but I’ll keep you in mind in case anybody can’t make it.

For the lighting on the layout I’ve put together we could put the existing lamps back in they’re original position, but also add any additional ones needed above new areas such as against the plasterboard wall at the top
This saves a bit of work on relocating the large lamp that was originally above the myford.

I think we should try to use up some of the middle area
I’ve put a OSB back board on the back of those black shelving units in the diagram so that they can be in the middle of the room
Also a new bench dedicated for the small watch lathe.
We may be able to fit more in the middle area in terms of cabinets or benches, since I’m not sure of the exact scale

For info I originally put the ultrasonic cleaner on it’s own bench with a 12V Car charger and water containers underneath
This was for electrolysis for use with de-rusting, but can also be used with electolysis
(there’s a robbert murray smith youtube vid that shows how to plate almost any metal without acid’s or dodgy chemicals, although better current control may be needed)
It’s probably best to keep anything water based away from the surface plate.

The existing benches are very solid, we got the wood from pallets from a door making company around the corner.
We think it’s indonesian hardwood (has a red tinge to it), so it might not look as good as a kitchen table for example but is probably much more hard wearing (and probably expensive).
There’s some existing draws underneath for some screwdrivers etc, although I’d like the idea of some kitchen units up above for more storage.

I’ve put the old benches back in they’re original position.
This is due to any banging / hammering on the benches in there might be more noticible from a noise point of view if they’re against the plasterboard wall.
Also it means I don’t have to redesign the legs / way they’re screwed together.

But I’m not sure if Mark’s suggestion is to create new kitchen unit’s for the large drill press / surface plate? looking at the description.
Currently the surface plate is on a specially designed pullout section on wheels, guided by pullout drawer slides.
We had to make it this way due to the weight of the surface plate and to over engineer it to make sure it was safe, so I’d like to keep that as is.
The large drill is also quite heavy. I think the table it’s on at the moment is fine as is unless anyone has any suggestions on that.

We can put the Bending machine into the Lobby / Elevator area eventually once we have a mill.
For now we can just leave it in it’s original position (since the Lobby is full of junk at the moment) until we’re ready.

This is a pdf version of the above for info

One thought / small change might be to move the myford next to the large drill press / left hand side of the blue block to avoid getting in the way of anyone using the green lathe.

One point my dad just thought of (he’s usually much better than me at thinking about more practical problems).
If we have kitchen units attached to the walls for storage up above, then it may be best for those to be attached to brick walls and not plasterboard walls.
This is due to the heavy weight of some of the stuff that’s likely to be stored within them (such as lathe chucks, and other such items).

With a plasterboard wall there’s a bigger risk of the unit tearing part of the wall down (or just coming off the wall) with the heavy weight inside. (this was a problem we ran into when trying to mount a light to the metal fencing, we ended up using a back board and bolts to spread the load).

All walls apart from the door wall have chipboard behind the plasterboard so that shelving/units can be wall mounted.

This also means work benches can be screwed to the walls to keep them rigid. Still need to have feet keeping them level on the floor though.

I might not be able to attend Sundays meeting so I’ll put any points I have here just in case.

I like the idea of having some work area in the middle of the room to use the space. In woody dusty the area is kept clear to allow for people to feed large sheet material into the table saw and for large project construction. That said have you measured and checked the fit of everything in your layout. You need to include a perimeter of 800 - 1000mm behind all workbenches and tools, not sure how much room to the side you should have though, Id aim for at least 400mm. As such only one of the lathes in the top right could be used at a time.

I agree that the cleaner on the surface plate is a bad idea. But I would like to see it on show rather than hidden away with storage under for the tools you typically use with them, surface plates are really useful when machining parts and it’d be nice to show it off. Would be good to get some marking blue (Dykem) as well, not sure if its on the metalwork consumables list already though.

I wouldn’t worry about making noise, not like our neighbours try to be quite. That said however the ultra sonic cleaner can be rather unpleasant so it might be an idea of moving it to the lift lobby so that it doesn’t annoy those already working in metalwork?

For the noise it’s not our neighbours I’m worried about, on the otherside of that wall
is the electronics benches with folks doing soldering or putting down tiny little surface mount components.
If someone starts banging away on a bench on the other side of the wall, tiny little bits will go flying everywhere

In the plans I put up the ultrasonic cleaner would be on top of a bench (on show), along with a 12V car battery charger
And a lamp right next to it.
underneath the same bench would be a large plastic tank that would be used for electrolysis / storage of water bottles
possibly used for plating later on (non acids). This is how it was setup originally on the bench nearest the doors.

There’s an image of it here, it’s the one on the right (although it’s missing the ultrasonic cleaner at the moment). Basically anything water related. 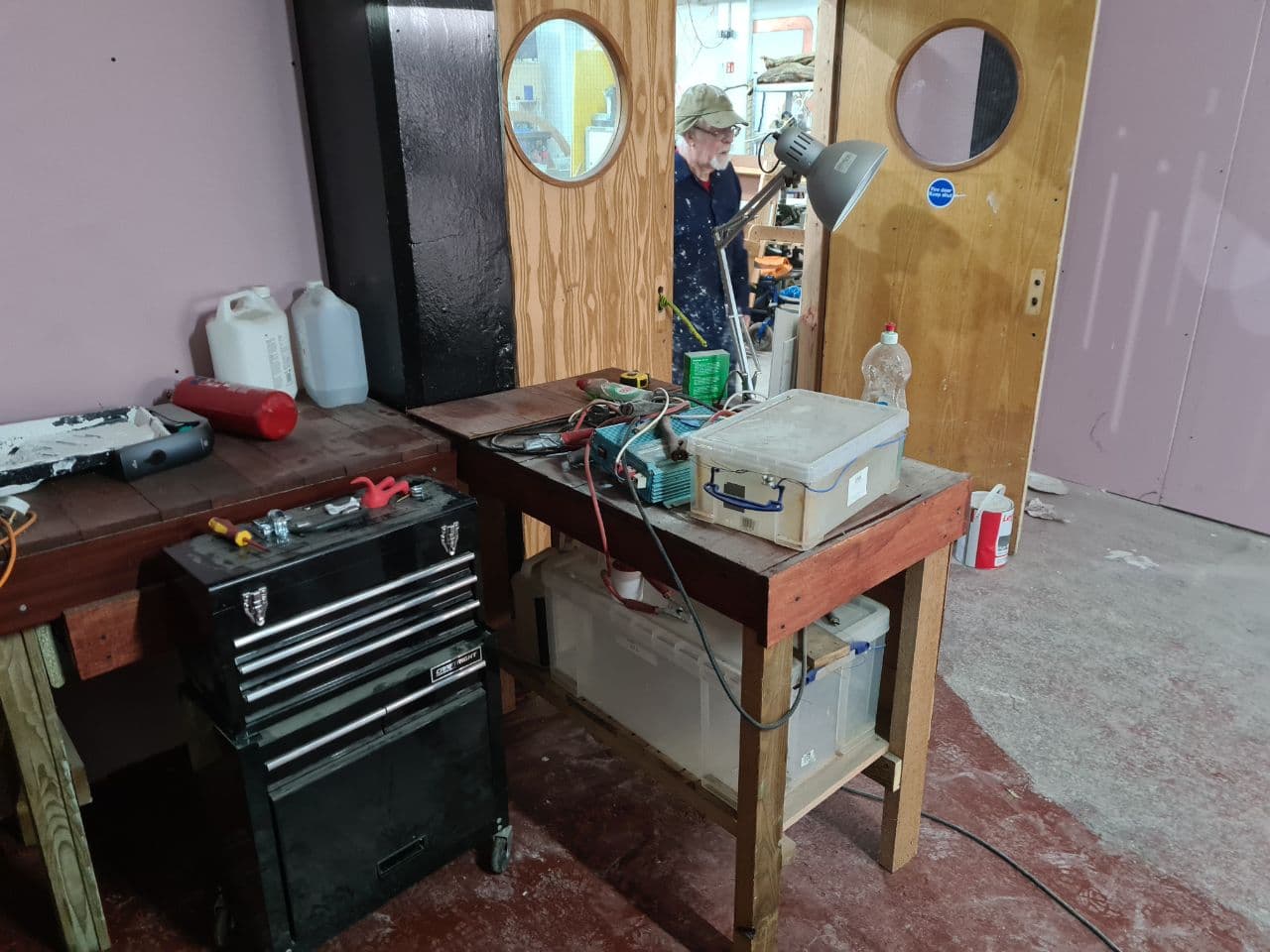 I think for the chipboard in the walls, one thought is how thick the chipboard is
if it’s only 8 or 11mm thick then it still might be too thin for supporting heavy things
if it’s thicker than that then you might be ok

For the Lathes I’m tempted to put the Myford more across to the left of the original diagram I put up (closer to the doors)
so that it’s away from the Warcon Green lathe. That might give more space behind it.

For the surface plate there’s a couple of reasons why we made it in a special pull out bench on a set of rollers
Upstairs originally it was on show uncovered but folks kept putting random stuff on it / leaving crap everywhere on top.
It got to the point where we ended up with coke cans and the like on it, (we also had less space upstairs)
So by putting in a pull out section we managed to make sure it was safely covered up from dust / random crap that could damage it. And provide more bench space at the same time.
It’s possible with the painting there may be less dust now, but I really don’t trust people to leave things tidy / not put crap everywhere. So I’d like to keep that as is to protect it if possible (and because it needs a lot of support from underneath as it’s really heavy).
I think there’s already one cup ring on it already (although that was from before it came to us)

I would like some Dykem blue though.
We also have a standup caliper thing and a V block for it somewhere in the cupboards for info.

Forgot to mention
For the ultrasonic cleaner noise, there was originally a backboard on that bench to prevent the noise leaking through to the main area.

Although now that we have the doors in place that should be no longer required. So I think that should be ok now, That being said I wouldn’t object moving it / the water bench into the lobby area, but we’ll need to shift all the crap out of there first before that’s a possibility.

After speaking with Adam on telegram
For the mains cable to be dropped down for the middle, and for 3 phase we’d probably have to do something a bit like this

for the cabling for 3 phase if we need it