As of the end of the second national lock down venues such as community centres and libraries have been exempt from closure as seen highlighted below. I believe that the Hackspace falls within this classification and, going forward the current guidelines should be amended to allow the workshop to be more accessible to its members.

In accordance with the above, I believe that members should be able to access the Hackspace at all tiers of restriction since they are providing voluntary services to its members and as such the Rule of Six should not apply, however in accordance with Manchester being in Tier Three restriction, members will still need to follow Covid Secure workplace guidelines (see below) 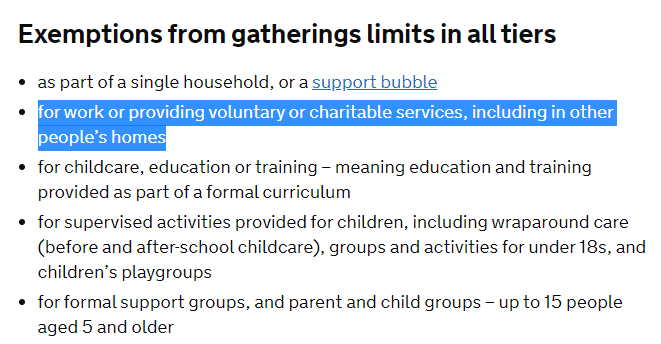 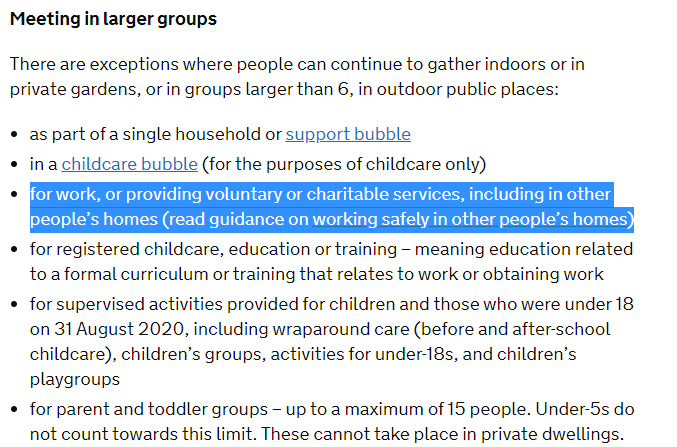 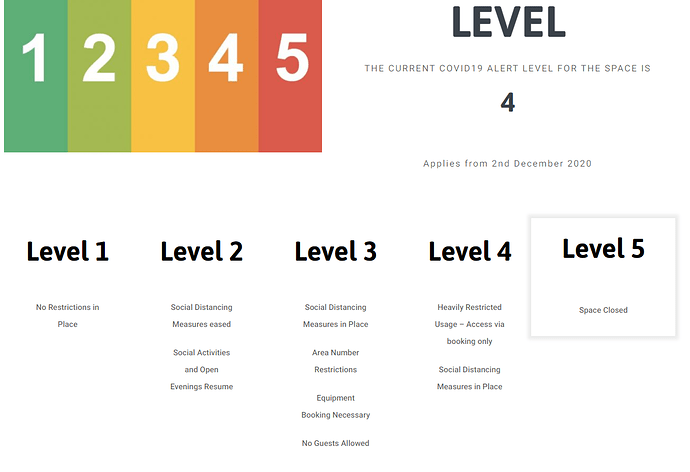 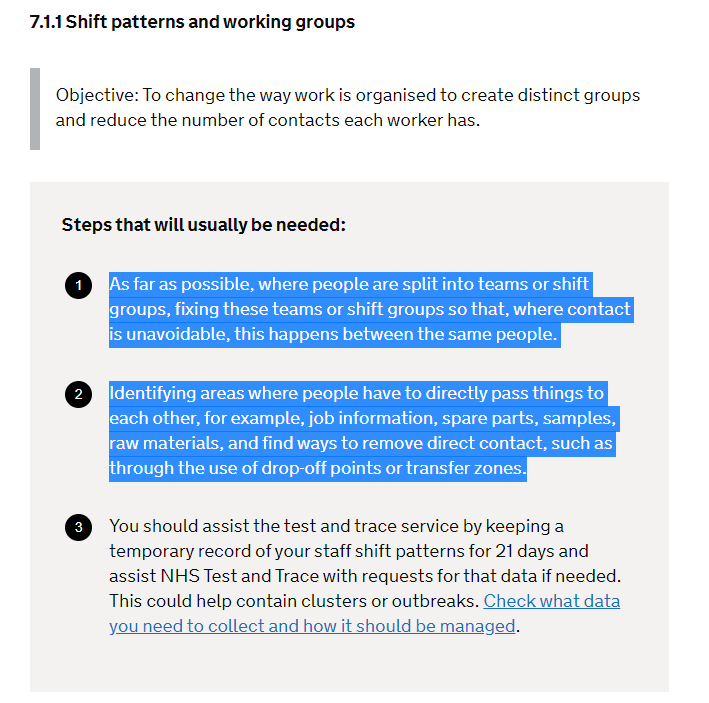 The diagram below shows changes I would propose to the Covid Alert System, so as not to limit use of the Space to one household or bubble at a time. 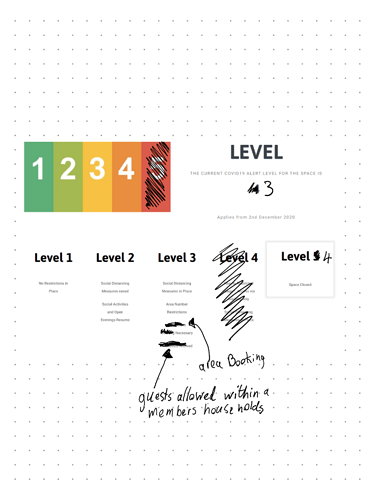 I believe that the current booking system is flawed since it does not cover all of the ways that the Hackspace is used, such as sitting at a table in the main area or using the table in the Visual Arts Area. As such, I would propose a change to the current system of booking an area in the Space rather than a single item, and as such allowing Hackspace Members from more than one household or bubble to be in the workshop at the same time.

In order to reduce the likelihood of mixing at the egress I would suggest we implement a staggered booking system which I believe would prevent members mixing in the space than the Hackspace than each areas can safely support.

Proposed Changes to the Hackspace to Prevent Households Mixing

Following a study of the Hackspace and the popularity of each area I would suggest a change to the way people travel around the Space, which would limit each area to one household per booking slot. To do this I propose that the areas be separated with walls or temporary barriers with only a single point of egress for each. I have two options for marking out each single household area outlined beneath the next diagram, supported by Aldi’s traffic light system for entry into their stores. 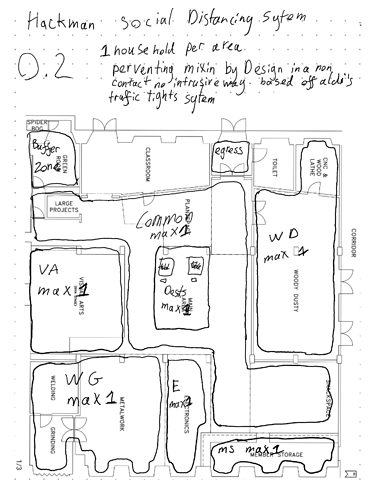 We could clearly differentiate each area of the space with a block colour signature and obvious floor markings which indicate that only a single household or bubble can occupy that area at any one time, and clear signage at the main egress point of the space to inform/remind members of the changes and how to follow them.

"The traffic light system was initially trialled in just 10 of Aldi’s stores and having proved successful, the crowd-control system is now being rolled out nationwide in their 874 UK stores this week. " 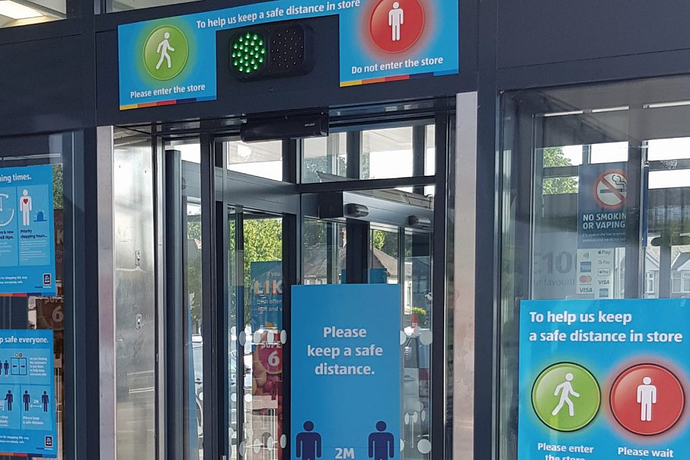 I would propose the use of PIR motion detectors, coupled with hall effect switches on each door to detect whether or not people are on either side and to determine the direction of travel.
This would be handled by a micro-controller with simple logic to power a traffic light display on each side of the door.
A benefit of this is system is that it limits contact between members in already proven way.
works automatically without member input and maintains the privacy members in the space. 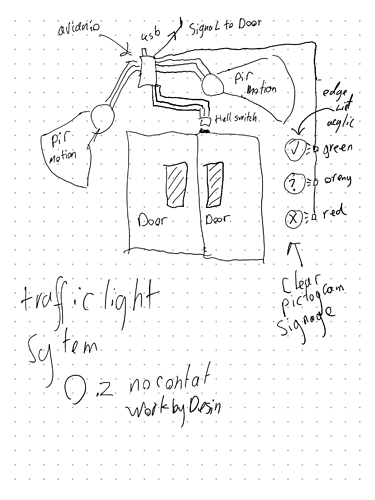 In order to gain an estimated total cost I purchased components for a single door from Rapid Electronics; the price of which was fifteen pounds. the remaining parts such as wire and led’s, micro controllers the space has in adequate stock. 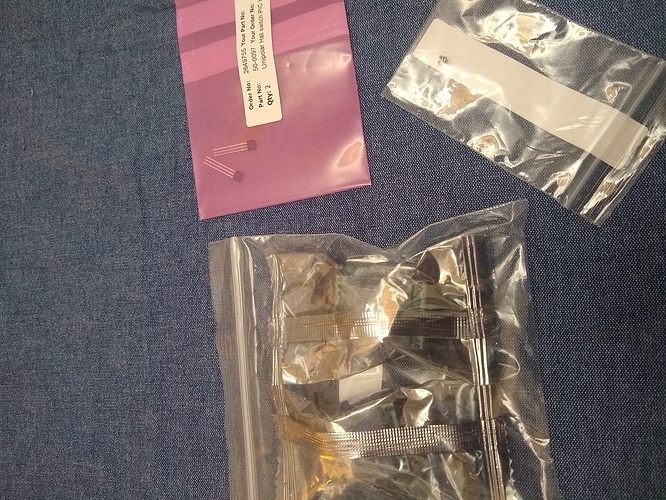 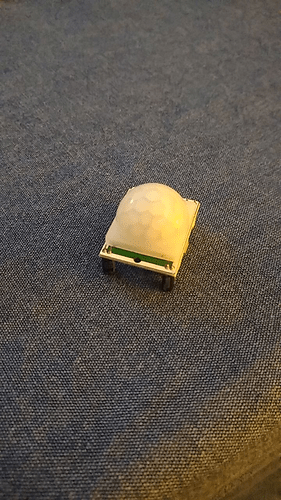 To demonstrate how this system would operate I have provided a number of simulations using Lego.

Scenario 1: Woody Dusty is occupied and a second member enters the Space. 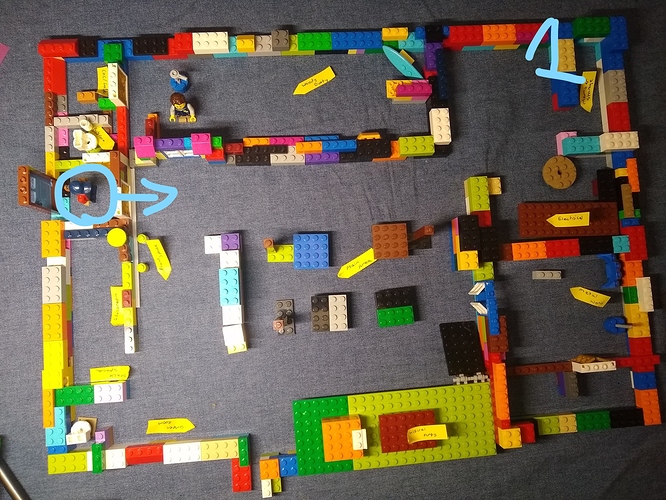 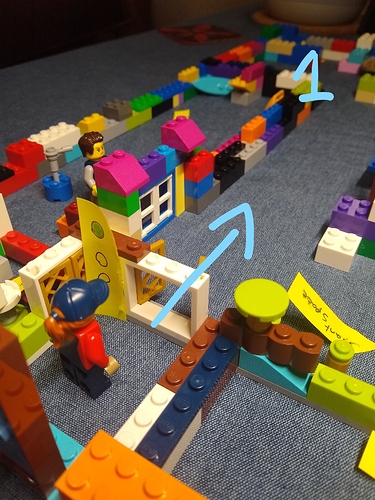 The signage outside Wood Dusty warns the newcomer to wait outside by flashing orange. 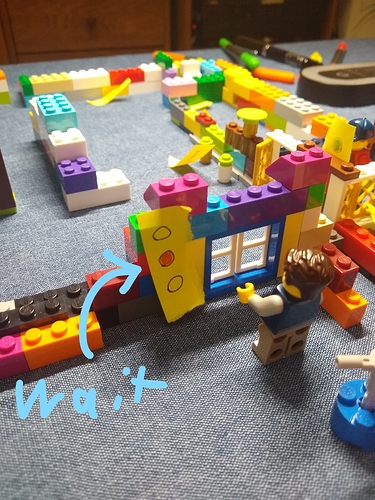 Scenario 2: There are members in the common area and Wood Dusty, and the member is Wood Dusty is waiting to leave the area. 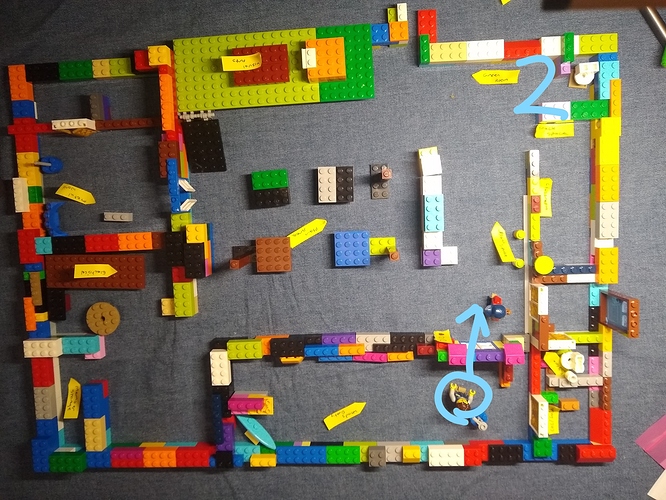 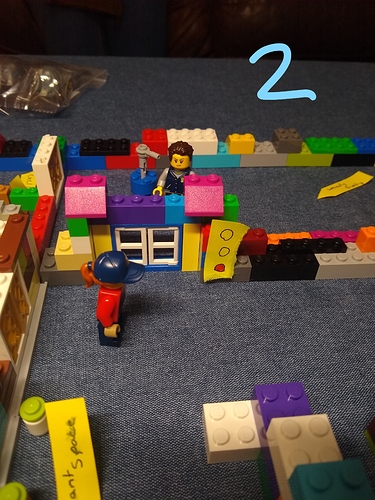 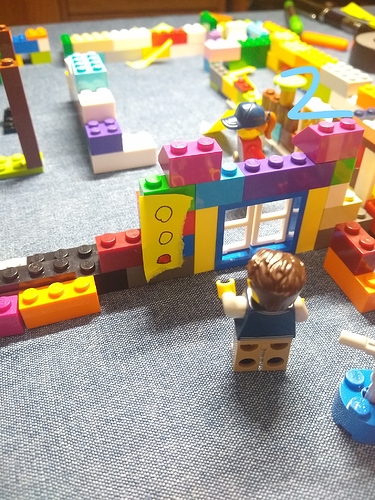 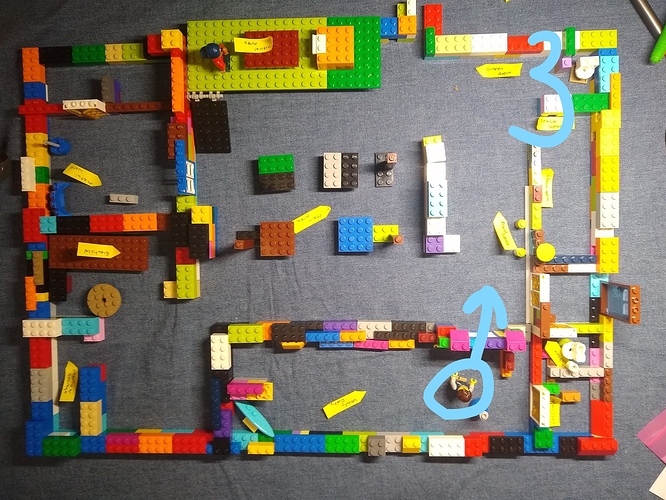 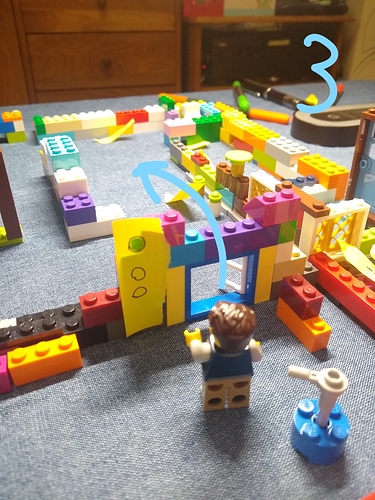 Visual Arts is now at maximum capacity however Weldy Grindy is free. 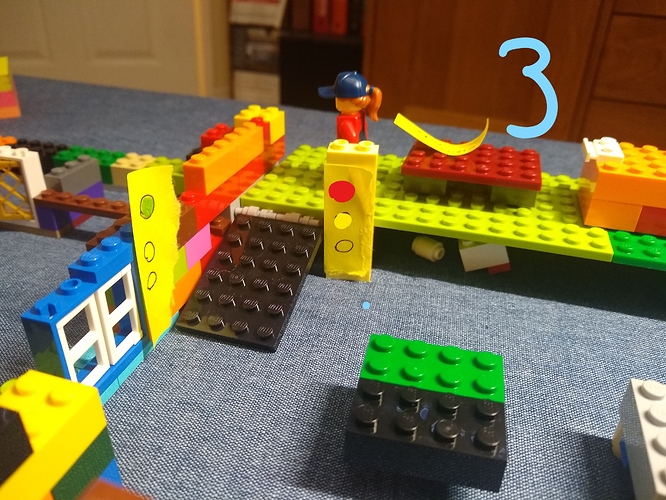 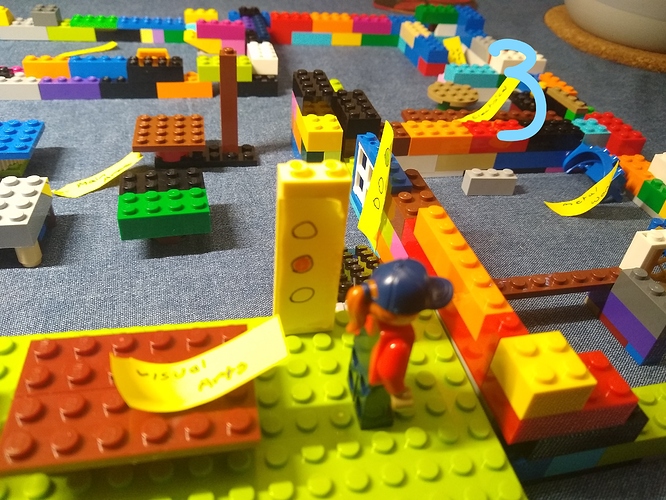 Scenario 4: The member in the Common Area has not moved to a new area. 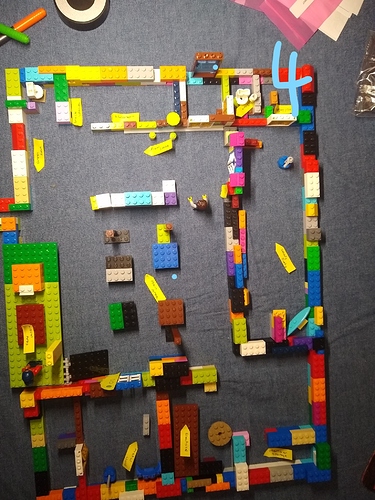 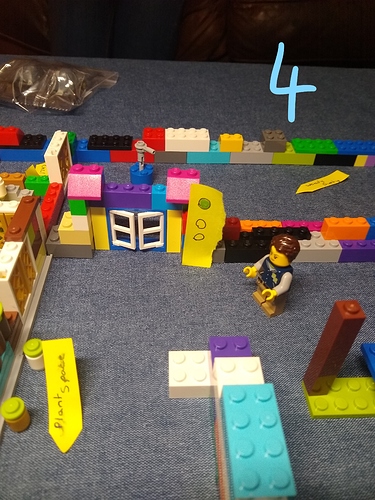 However the person in Visual Arts cannot leave since the Common Area is full. 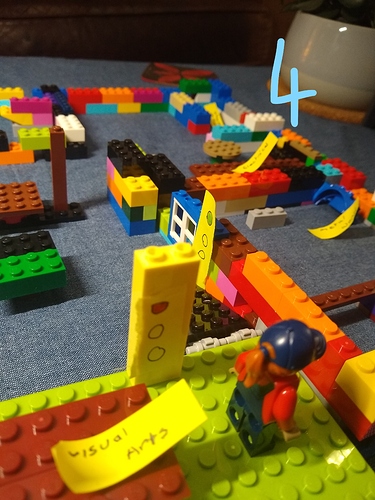 At the request of a member. The board have agreed to publish the response to this proposal that was initially sent as an email response to Alex on 22 December 2020.

This can be found below

The board have reviewed your plan and whilst you raise some valid points we do not believe changing our current strategy is warranted.

Project Reboot was developed as a way to reopen the space safely in order to allow us to operate in a way that would keep members safe whilst still allowing access to the space wherever possible. This was developed using guidance from various number of sources including Local & National Govt, World Health Organisation, Independent SAGE and also specific guidance available for hackspaces only published by the Scottish Government. All this guidance is regularly reviewed and the most up to date information is taken when assessing any changes to Alert Levels for the space.

Whilst these restrictions may lead to the space not being as socialable as it previous was or tools not being able to be used at this time due to lone working our first priority is keeping people safe and the rules allow for the space to remain open at all times with the exception of a national lockdown and whilst it might upset people that they can only spend a limited time in the space or they can only use certain tools its better to have the space available in some sense rather than being closed completely.
This week alone saw a new variant of the virus emerge that appears to spread more easily and despite the roll out of a vaccine this virus remains a threat, its still a risk to life and because of this we are going to need to operate as a COVID-19 secure environment for some time to come and the restrictions we have in place do this.

You raise some points which I would like to address in order for you to understand our reasoning behind not changing our current approach.

Whilst libraries and community centres can remain open we aren’t a library or community centre, yes we might use some of the guidance that is given to these sort of premises we can’t fully follow it as we don’t have the resources to implement some of the strategies they have in place, Queuing systems, intensive cleaning regimes etc.

The second point I’d like to address is that the space is a workplace. Hackspace Manchester is not considered a workplace, we aren’t setup as a co-working space (unlike say Hack Oldham) our business nature is activities of other membership organisations not elsewhere classified. First and foremost we are social/hobby club for people who want to make things and whilst people may use the space for their own work activities it isn’t classed as their place of business eg we don’t offer the ability to run your business from the space, we don’t provide mailbox addresses, we don’t guarantee the availability etc of equipment etc

Thirdly whilst you use the example of a retail environment to demonstrate how the space could operate we need to be clear that first and foremost the space isn’t a retail environment and this isn’t the first time we’ve been told we could run it like aldi etc does, big differences there include people don’t spend typically more than an hour in the supermarket but people tend to spend longer in the space, now it should be noted here that actually supermarkets appear to be the biggest area of transmission of the virus amongst communities so aren’t necessary the way we should be operating anyway) and unlike many supermarkets and shops the space itself doesn’t have great airflow nor does it have a rigid cleaning regime so the risk in airborne or surface to person transmission is greater in the space the longer someone is in it.

Changes to the alert levels, in particular the removal of level 5 eg a full closure of the space would actually break the law. Legislation published before each previous lockdown (and would likely be published again should the need for another national lockdown arise) states “You cannot leave home “without reasonable excuse”. The law provides a selection of reasonable excuses and we were able to keep the space open for construction work during the previous lockdown due to this but for other usages could result in us facing the risk of fines up to £10,000.

Regarding the booking system for Level 3. This was only designed for key pieces of equipment it wasn’t designed for general areas of the space like sitting at the visual arts table. Each area has a maximum allowed number of people for Level 3 which takes into consideration the number of working areas. Limiting it to 1 person per area would actually reduce the number of people allowed in the space from Level 3 onwards. As for staggering bookings, this was considered but the risks were weighed up against what we would lose and as long as people follow the general social distancing guidance then 2 people being in the space for 5 minutes whilst someone leaves and someone comes in, the transmission risk compared to the fact that a staggered booking system would actually lose around an hour of space time (or 1 whole booking slot) each day reducing overall the number of slots available to people.

On the topic of introducing guests. We are legally obliged to collect details of access to provide to NHS track & trace and whilst at the moment we use the door logs to identify those who have been in the space in the timeframe as a quick and effective way of doing this, collecting data for guests, ensuring this is collected and having it in a way to be able to easily retrieve it doing this would increase the administration burden on the board more importantly guests also increase our risk of transmission both to members but also to spreading the virus should it be passed on in the space and as such guests will not be permitted until we have reached level 2

I would also say that the restrictions we have in place are actually quite less severe than other Hackspaces across the country have implemented Nottingham Hackspace for instance are currently operating on Level 1 of their hackspace COVID secure plan and that restricts access to the space for Essential use only determined by the board and a booking system that requires each appointment to be approved by the trustees meaning instant access isn’t available. (this requirement also applies to their level 2 which is equivalent to our Level 3) South London Makerspace operates a similar approach too.

please note lines 1,4,29,30 have been omited from the above and have been incuded below also line 29 had the spelling updated on the phrase “hacksapace covid” to “hackspace COVID”
these omited changes dont hold senstive infomation and see no reson to exclude them.
1.Hi Alex
4.Thank you for the taking the time and effort you put into coming up with an alternative approach to the COVID plan for the Hackspace. Please note that any future proposals should be sent to the board via email directly and not just a link to the forum or telegram post.
29.Thanks
30.Ross